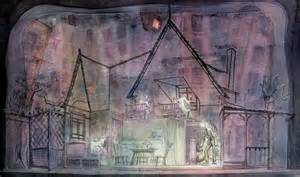 Broadway, in the last 30 years or so, has been consumed by the big effect. Sometimes that big effect has been accomplished simply, such as the original production of Pippin, and sometimes it’s been done using fairly extraordinary means, such as in shows like Miss Saigon, Evita, Wicked, and many other shows.

It’s easy to decry big effect theatre as being that and only that. But sometimes it is only that- the big effect. Still, there’s nothing to say that Broadway or any theatre should not utilize the big effect. The question is, though, at what price is it being used? That question is both a practical and artistic one.

One question to ask about any show is does the play or musical really benefit from looming video screens, high-powered FX, and automated scenery that seems to do everything but spew lines and smile. The latest Broadway revival of Death of a Salesman (2012) opted to go with the original 1949 set designed by Jo Mielziner. It was noted that the set was used because Mielziner’s design specifically connected with the progression and development of the play and Willy’s character.

That doesn’t mean to say that Broadway should be about recycling ideas. The 2013 revival of The Glass Menagerie was noted for its fine acting as well as the atmosphere created and enhanced by the moat that surrounded the Wingfield apartment and the fire escape that seemed to disappear into the ether.

Some thought that these new touches enhanced the play, while others felt that they made image and atmosphere more important than the language. This is the same sort of argument you might get for a play by Shakespeare being produced using the latest special effects.

If you’ve got a good script in hand, then it becomes a question of balance. If you’ve got a show on the boards with gaping holes, then the big effect can tend to become a superficial remedy but not a cure for what ails the production.

The big effect is nothing new. In the American theatre during the mid-19th into the early 20th centuries, the exciting effects in Ben Hur, Uncle Tom’s Cabin, The Black Crook, Under the Gaslight, and many other shows, thrilled audiences. These shows had fairly complex plots but often relied on two-dimensional characters.

Also, the extravaganza, which featured thrilling stage devices, special effects, and atmospheric enhancements, was in full gear. These shows often had thin plots and simple characters. They focused a lot of their energy on engaging audiences through spectacle.

One question to consider is might simplifying productions reduce ticket prices? This doesn’t mean lowering standards, but it does entail focusing more on the actual performance rather than the elements we use to enhance performance. The Medieval cycle plays often involved major special effects, while the English Renaissance theatre offered simple production elements, allowing the lines and acting to create the scene. Which of those types of plays are more likely to be produced on Broadway today?

Perhaps we are past that type of bare bones presentation except in rare instances such as when Mark Rylance and company came to Broadway in 2013 and performed Richard III and Twelfth Night using basic production elements. Is this a more genuine theatre experience, or do we require everything that technology has to offer in order to be satisfied in the theatre? Should theatre become more like film, and if it is, is it still theatre, or should there be a movement towards ensuring the art form remains pure? (Whatever that means?)

These are questions worth asking, considering, and debating. Why? Because if we don’t stop and ask these questions then we’re mindlessly producing plays in a manner that is more akin to Mab Libs than art.

The musical If/Then was a highly imaginative undertaking by Brian Yorkey and Tom Kitt. It was complex in thought and offered fairly interesting characters in life-changing situations. But when watching the production it was hard to stay connected to the show, as each scene, with it’s shifting, highly customized scenery, exacting lighting, and intensely orchestrated sound was so controlled that the actors were inhibited by those things that should be supporting their performances.

Were they really live performers or these beings having to conform to what stage technology allowed them to do? Simple things, such as the powerful use of diagonals, geometric configurations, and multilevel playing were nonexistent.

Somehow this need to clutter a production with “something” steals the genuine, human energy from a show. If these are the types of productions that Broadway aspires to at an average ticket price of more that $100, then perhaps basic questions concerning what the theatre experience should prize the most should be asked.

You can’t help but think that If/Then and other Broadway shows would be better served by simplicity so that the play or the musical can play rather then be pushed along at breakneck speed.

Then again, we get back to in what places we might really see and experience great theatre? Maybe that’s what Off-Broadway and other venues are all about, producing great theatre. Broadway may just be, for the most part, bread and circuses to stimulate our senses for a few hours, and maybe there’s nothing wrong with that.